JULIEANN STIPIDIS: While attending Final Girls Film Festival this week, you’ll be presenting “… Martyrdom in Modern Day Horror,” a presentation about the true meaning of the oft-misunderstood concept of martyrdom and how it creeps into contemporary horror— based on your chapter of the upcoming academic book Scared Sacred. What initially inspired you to explore martyrdom within the genre?

ANDREA SUBISSATI: Well, that one’s easy – the topic was actually assigned to me! The editors mentioned they wanted a chapter on the subject when they reached out, and I agreed. Alex and I had discussed martyrdom briefly in our episode on Martyrs, but I wanted to dig deeper on the topic, and this was the perfect opportunity!

JS: Your presentation will look at Martyrs and The Exorcism of Emily Rose, both of which are centric to female protagonists. Martyrs notes that young women are more “sensitive for a transformation” into martyrdom. In your opinion, why are women (still) so often the martyred characters in horror films?

AS: I think suffering and womanhood are inextricably linked. I think women are expected to suffer, in fiction and in real life, and I think this has to do with the belief that women are at a biological disadvantage (ie – childbirth, or being physically “weaker”). Whether the Mademoiselle in Martyrs would agree with that, well … I think there are a number of things we wouldn’t agree on!

JS: Martyrs specifically describes a martyr as a “rare, exceptional being” that “survives suffering, the lacking of everything”— before ending the film with the simplistic definition of a “witness.” Which definition do you find to be more prevalent within recent horror? And what current sociopolitical issues (if any) do you think this is a reflection of?

AS: The idea of the martyr as witness harkens back to early Christianity where people claimed to have been visited by the divine – this put people in perilous positions for a couple of reasons depending on the era. There was a time where claiming to have seen something holy was considered heresy, because the clergy insisted only they should have direct access. I don’t think either of those definitions holds a lot of water nowadays – I think martyrdom has entered the realm of symbolic subjectivity, where the term could be applied wherever a particular meaning is ascribed to someone’s death.

JS: Your other presentation for FGFF this week, “Industry Talk,” will tackle some of the biggest questions on any emerging horror journalist’s mind. What is the biggest mistake you see from writers/journalists looking to break into the industry?

AS: A common mistake people make when pitching me on features is that they forget that a magazine is still technically news journalism. Obviously, a bi-monthly print periodical can’t deliver “breaking news” in the traditional sense (we can’t compete with Twitter!), but I get so many pitches from people who just want to write about a movie they loved as a kid, a movie they grew up with, a movie they saw 15 years ago that they feel is underrated, etc. I completely understand where they’re coming from, but my role as editor isn’t to run the pieces writers want to write – it’s to run the stories my readers want to read. Like okay, Phantasm is great, but it’s also 30 years old. We’ve run numerous stories on the franchise over the past three decades – what new light can we possibly shed on it now? I hate to shut doors on people’s passion, but a regular print magazine works differently than a fan blog. Trust me – I’d love to run cover stories on Night of the Living Dead twice a year, but it wouldn’t be a good idea!

JS: I recall a past episode of your FOH (FACULTY OF HORROR) podcast in which you and Alex suggested to sticking to casual, freelance writing while working a day job— instead of worrying about horror journalism as a main source of full-time income. Have your thoughts on this changed? Would you still recommend this?

AS: No, I stand by that statement, and not just because full-time paid gigs are scarce. I love my job and I’m very grateful to hold this position, but it’s not what people think it is. Again, I can’t just run anything I want because I feel like it. I need to evaluate stories based on my perception of my readership, I need to offer a variety of stories for a variety of tastes, and sometimes, I need to make tough compromises. If you truly love writing about horror, do it for love! The hustle and red tape can be really exhausting, and it’s not worth it to risk ruining something you love to do.

JS: Women like you have given other emerging female journalists (like myself) a little more bravery to tackle the big, bad words in their pieces such as “feminism” and “patriarchy” for example— which undoubtedly angers a particularly less mature demographic. As a woman in still a fairly male-dominated industry, how do you respond to toxic feedback?

AS: I think it’s critically important to find support from other women working in the industry. Sometimes a critical comment of that nature will arrive at a bad time and it’s easy to read an email and think, “Wow, does everyone really feel that way?” It’s irrational to take one remark and blow it up like that, but I also think it’s normal to hear criticism more loudly than praise. I’m fortunate to have close bonds with other women working in the industry who can help me regain perspective and lift me up when the haters get me down.

JS:What do you hope to see the most from the next generation of new voices coming up in the horror journalism industry?

AS: I love seeing people making use of social media in new and innovative ways. Horror is better enjoyed as a community, and it’s great to see people finding new ways to connect in the digital age. I’m happy to hold the torch for print as long as I can, but as Jeff Goldblum might say, horror … finds a way!

All of us in the horror community are so lucky to have you, Andrea! Thank you for taking the time to answer these questions for our readers. xoxo 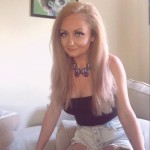 FIVE HORROR CHARACTERS I WANT TO GRAB A BEER WITH

Next post [REVIEW] VINEGAR SYNDROME’S ‘BLOOD MANIA’ AND ‘POINT OF TERROR’ SET RIPS THE SCREAMS RIGHT OUT OF YOUR THROAT!