Well, despair no longer for NIGHTSTREAM is coming to save us all!

Combining the might of up to FIVE film festivals (a few of which we have even covered HERE at DIS/MEMBER, True Blood-Levers!), NIGHTSTREAM aims to bring the horror festival experience to your living room.

While fests like the Brooklyn Horror Film Festival and the Overlook Film Festival were forced to cancel their in-person fests, NIGHTSTREAM seems to be resurrecting their programs, offering up the same experience just from the comfort and confines of your own home.

Check out the full press release and links below! We hope to see you there! 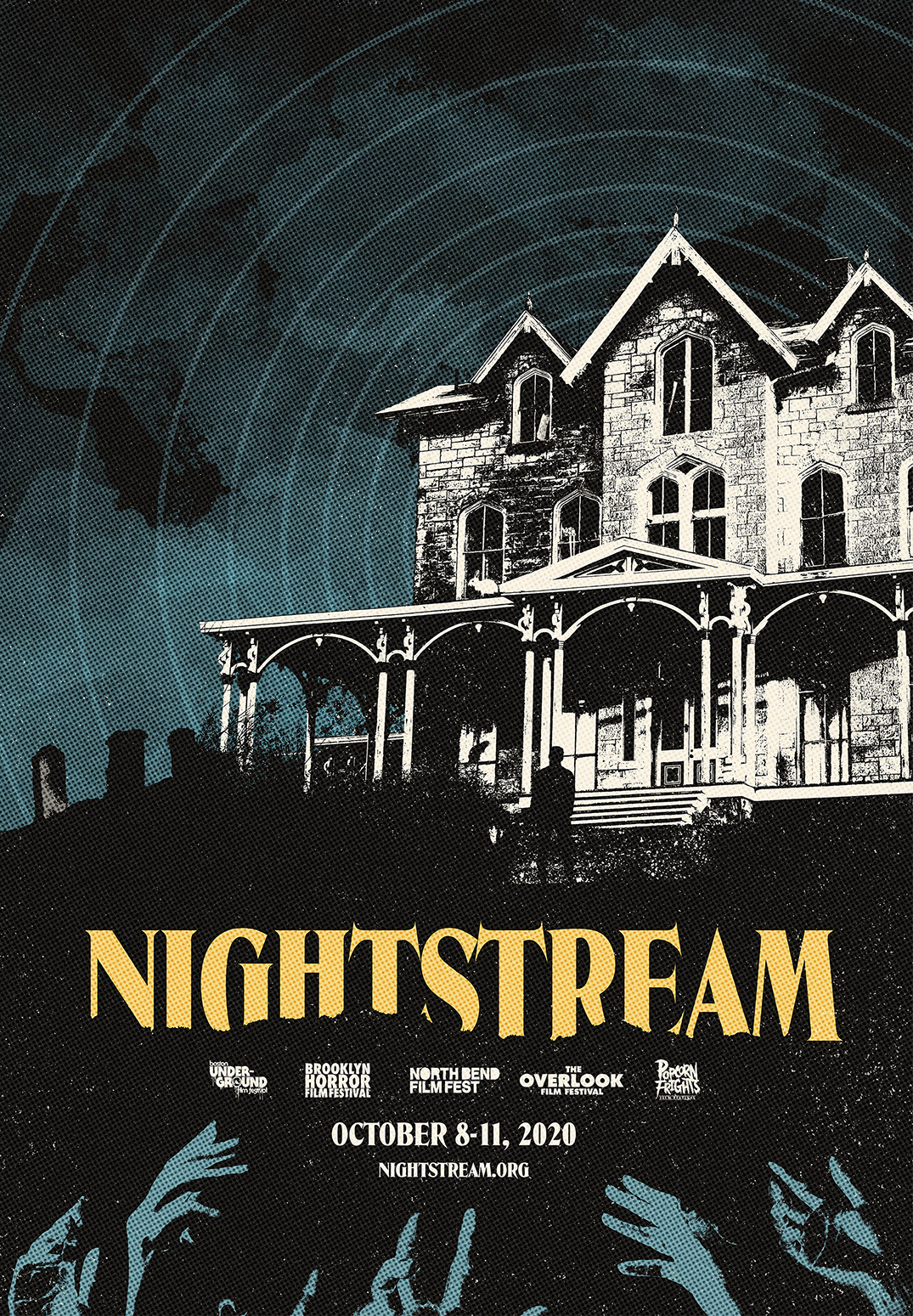 Thursday, August 13th, 2020 — In response to the many challenges impacting the film community amid the Covid-19 pandemic, and the concerns of safety and security that presently come with physical exhibition and festivals, a collective online initiative will be launched by organizers of a number of American genre festivals for the upcoming fall season to offer a singular experience for U.S. audiences. Together the Boston Underground Film Festival (MA), Brooklyn Horror Film Festival (NY), North Bend Film Festival (WA), the Overlook Film Festival (LA), and Popcorn Frights Film Festival (FL) will join forces under the banner of NIGHTSTREAM to present a dynamic and accessible virtual festival, to run from Oct. 8-11.

Programmers from all five festivals will collaborate on the NIGHTSTREAM feature film line up, and these films will be recognized as an official selection of each festival entity as well. The short film programs will be individually curated by each fest, along with a full slate of live events and panels taking place over the weekend. The lineup is expected to be announced in late September.

Proceeds from the event will be shared with all participating filmmakers and artists, and donations will be made on behalf of each associated festival to charitable causes and local businesses in their home cities. Earlybird Badges are now on sale, and NIGHTSTREAM will offer two options for badges: a five film bundle and ten film package, priced at $55 and $90 respectively with each badge granting unlimited access to live events and panels.

The Boston Underground Film Festival, which usually takes place every March at the historic Brattle Theatre in Cambridge, MA, was forced to abruptly cancel their 22nd annual event due to the pandemic. Popcorn Frights Film Festival, the largest genre film festival in Southeast US, postponed their 2020 edition that was originally slated to take place this month in Fort Lauderdale, FL. Having previously been postponed for this year, the Pacific Northwest destination event North Bend Film Festival was originally set to take place this month in the famed Twin Peaks town near Seattle, WA. The Overlook Film Festival, which annually programs a celebrated slate of horror cinema alongside live performance and interactive events, postponed their upcoming edition, which had been planned for late May in New Orleans. The Brooklyn Horror Film Festival, which specializes in cinema that pushes horror’s boundaries, will move its planned fifth edition up by one week with this transition to virtual.

NIGHTSTREAM will be geo-locked to the U.S. and hosted on Eventive, which offers enhanced security features including the same DRM technology used by Disney+, iTunes, and Netflix, and is trusted by leading distributors and studios including A24, Sony Pictures Classics, Starz, Showtime, and National Geographic. It will function on multiple internet browsers as well as Roku, Apple TV, Chromecast and other connective devices to ensure the most wide-reaching compatibility, as well as comfort for viewers.

The festival will feature a program showcasing a mix of international horror, fantasy, sci-fi, vanguard, and underground films that capture the distinct curatorial l spirit of each festival. Highlighting imaginative, daring, and bold voices in cinema, NIGHTSTREAM will encompass the full scope of genre storytelling and provide an exciting home experience for film fans this Halloween season.

For more information about NIGHTSTREAM, and to view our open letter of intent signed by each collaborating festival, please visit https://nightstream.org

Justin Partridge
justin@betweenthepanels.com
Lover of table top RPGs, prog rock, and anything with Walton Goggins in it. Find his other blathering at THE COLLINSPORT HISTORICAL SOCIETY.

FIVE HORROR CHARACTERS I WANT TO GRAB A BEER WITH

dismemberonline
•
Follow
Happy birthday TWIN PEAKS. the show that taught us to everyday give ourselves a little treat. #TwinPeaks #DavidLynch #HowsAnnie #HOWSANNIE
View on Instagram |
1/9

dismemberonline
•
Follow
Justin just turned in his review of @bigfinishprod’s THE ANNIHILATORS and it’s a DELIGHT! Both a wonderful example of how good the current Third Doctor Adventures range is AND a great introduction to the new Second Doctor Adventures. We can’t wait for more. #TheThirdDoctor #LizShaw #BrigadierLethbridgeStewart #TheSecondDoctor #JamieMcCrimmon
View on Instagram |
2/9

dismemberonline
•
Follow
40 years ago today, we saw dark shadows moving in the woods. And we had no doubt that whatever we resurrected from the book was sure to come crawling…FOR US! Happy Birthday to 1981’s THE EVIL DEAD. #TheEvilDead #EvilDead2 #DeadByDawn #ArmyOfDarkness #SamRaimi #BruceCampbell #GROOVY
View on Instagram |
3/9

dismemberonline
•
Follow
“Everyone is A Book Of Blood. Whenever we are opened up, we’re red.” Happy birthday, Master. #clivebarker #happybirthday #hellraiser #thebooksofblood #thethiefofalways #abarat #nightbreed
View on Instagram |
4/9

dismemberonline
•
Follow
With the increased prevalence of Lovecraftian films, the author revisits his introduction to cosmic terrors and returns to The Dunwich Horror. [Read it now on DIS/MEMBER!] . . . . . . #thedunwichhorror #horror #retrospective #horrorclassics
View on Instagram |
7/9

dismemberonline
•
Follow
Johansson and Pugh's chemistry as a sister duo is worth a watch and like any Marvel movie, you're promised a good time! [Read the full review on DIS/MEMBER!]⠀ ⠀ #blackwidow #marvel #filmreview #disneyreview
View on Instagram |
8/9

dismemberonline
•
Follow
Let’s take a look at the 10 horror movie villains we hate to love, and we will end up rooting for ’til the very end. [Read now on DIS/MEMBER!] ⠀ ⠀ #horrorvillians #horrormoviews #horror #psycho #normanbates #hannibal #chucky
View on Instagram |
9/9
View on Instagram