“Maybe I indulge what I should resist, cling instead of cure.”

Talk Gory To Me

Despite some of the genre’s most iconic performers and characters being female, horror films remain attached to the dichotomous female viewer: either a girl is tricked into viewing. She is misled into a setting filled with screams, and she turns her face into a sheltering male shoulder for comfort—or she’s tough, in the know, and hardened  to on-screen gendered violence. Nutt’s collection pushes aside this duality, preferring to wade in the murkier waters of reality’s relationship to art. The result is an ur-text of feminized experience: Emily Dickinson in conversation with Darkness Falls (2013), decaying malls aligned to Amity Island of Jaws (1975), beauty pageantry highlighted by Splat Pack spatters.

Discussion of suicide and suicidal ideation abounds; Nutt’s family has lost several members to this tragic end. Rather than recount statistics, list defenses, or indulge in bystander hypothesizing, the author chooses oblique harmonies of image and quotation, personal memory and cultural detail, to paint a larger portrait of legacy, disease, and doom in the mythic sense. Horror becomes a lens through which to view circumstances born into or chosen. Gore and mind games, rustic cabins and sprawling family estates—tropes as familiar as heartbeats are re-cast and re-examined with an aficionado’s eye and a poet’s ear.

Bodily realities are always front and center in horror. Dismemberment, sexual assault, and violent transmogrification splash across screens and drip from the pages of Stoker, Carter, and Barker. Nutt knows that for every dialed-up scene of decadent torture in Hostel (2005) or The Evil Dead (1981), there’s a tangible body, poised on a bridge above an Ithaca gorge or frozen by an unwanted hand. Girls twist themselves into tormented balletic shapes inside Night Rooms‘ pages; they purchase strange taxidermies, post small cruelties to LiveJournals, play sleepover games. The idealized feminine form (thin, white, cis, straight, able-bodied) appears pubescent on the mall-pageant circuit, similar to JonBenet. This form is transformed by tattoo ink, by pregnancy’s spectre, by wounds as inconsequential and permanent as mosquito bites.

Nutt, seemingly a media connoisseur, is enamored with all things communicable. Zombies transmit decay on screen, while prompting survivalist planning in viewers. Suicides are said to run in families. Schoolyard gossip morphs into the classic chain email, warning girls of bad luck, lost love, and eternal curses if the letter isn’t forwarded. What is possession itself if not overwriting, re-coding, a bone-deep communication of belief, intent, and power?

Uninterested in prescriptive best practices, top-ten listing, or debating psychological versus slasher, Night Rooms instead revolves around personal realities. Uncertainty and utter subjectivity win the day and, in doing so, create a more universal malaise, a more welcoming interior world. Gina Nutt’s collection is an achievement, braiding together disparate spaces and fragmented images to haunting effect. 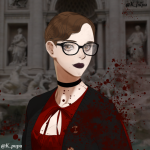 [REVIEW] DARK SIDE OF THE RING: S1 EP1 – THE MATCH MADE IN HEAVEN

Previous post [REVIEW] ‘THE CONJURING: THE DEVIL MADE ME DO IT’ IS A SCATTERED TRILOGY CAP