“Tell me a tale of yourself, so that I might know thee.”

Being a huge fan of A24 was enough to make me anticipate the release of The Green Knight (2021), but being a nerd for English literature sealed the deal. For those who don’t know, The Green Knight is a retelling of Sir Gawain and the Green Knight, a late 14th-century English chivalric romance in which Sir Gawain, a knight of King Arthur’s court, engages in a beheading game with a mysterious and mystical character known as the Green Knight.

On Christmas Day, the Green Knight enters King Arthur’s court and extends a challenge to one of the knights to attempt to behead him. In return, that knight must journey to meet him in a year’s time at the Green Chapel to receive a beheading from the Green Knight. When Sir Gawain takes up the challenge, he finds his honor tested in multiple ways.

While the film keeps the story’s main elements, it adds on quite a few subplots and extraneous details. For instance, Gawain is not yet a knight at the time of the Green Knight’s challenge. This film version of the Green Knight story focuses mainly on Gawain’s journey to the Green Chapel and character development along the way. I appreciated that this movie is very atmospheric and aesthetically pleasing. The costumes, music, and acting are all on point. Part of the excitement of seeing works of literature that you know and love on film is being pleasantly surprised by a new iteration while also experiencing the joy of familiarity. The ending of this film was what I found the most interesting.

In a plot twist that reminds me of the ending of Martin Scorsese’s The Last Temptation of Christ (1988), the final scenes show Gawain pursuing the alternate path of choosing to save his life rather than keep his bargain with the Green Knight. However, the film cuts away from the alternate montage to an abrupt ending in which the main character chooses to face his fate head-on.

Although this rendition of Sir Gawain and the Green Knight was interesting, to say the least, it was not the film I had hoped to see. The extremely slow pacing, extra characters, and subplots seemed irrelevant, and like they were added only to pad the runtime. I appreciate this film for its good points. However, it is not something I would see again or recommend that others use their time to see. 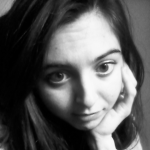 Muriel Truax
murieltruax@gmail.com
I enjoy exploring my city, reading philosophy and comic books, and watching horror movies. I am a strong advocate for spicy cinnamon gum.